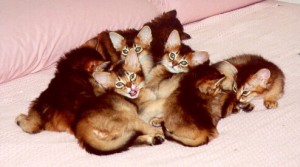 Genetic health is extremely important to Imzadi Cattery. Monique seeks genetic and health advice from people she respects about issues associated with the lines she is working with. She is as conservative as possible to reduce the chances of genetic problems. Monique has been known to cancel planned breedings when she becomes aware that cats in the pedigree may have suffered from illness that is believed to be genetically based. To her knowledge, none of her cats have had any health problems associated with a genetic component other than gingivitis. After the gingivitis was discovered Monique spayed the female and one of her daughters who also had it. Imzadi Cattery is and always has been free of Feline Leukemia and FIP.

The debate over what a Somali really is still rages on. Some experts insist the breed is a hybrid. In times gone by there may have been an outcross to another breed with a longhair gene. Other experts surmise that it is a mutant in which the normal shorthair gene, the L+ allele, has changed into the longhair gene, the l- allele.

Genetics expert Don Shaw has another theory. He wrote “…(T)hese ‘longhaired’ cats (possibly) … do not really carry the l- allele in homozygous state, yet have a semi-longhair coat. How can this be? Well the Abyssinian was noted for its ‘almost double coat. ‘…The gene tic factors which give this type of coat are thought to be a complex combination of modifiers which increases the length of the awn hair and down hair coat of the cat. If these modifiers are collected in homozygous condition, they might be expected in extreme cases, to produce this type of longish, very soft, silky body coat and very plume-like tail. Is this type of thing consistently reproducible? Yes, it most certainly could be, if proper selection were employed….It would also follow that repeated breedings of cats with this type coat–even with selection for greatest length–would not develop coats with the length found in show Persians.” (CATS, May 1974, page 18)

The longhair gene is elusive at present. It is highly recessive. The same breeding pair of shorthairs that produce a Somali kitten will have many more shorthairs before producing another Somali. But the gene is definitely present and the Somali itself does breed true.

From “Those Red and Ruddy Longhairs,” CATS Magazine, May 1975

[dropshadowbox align=”center” effect=”horizontal-curve-both” width=”800px” height=”” background_color=”#fdfdfd” border_width=”1″ border_color=”#f4f4f4″ ]Above article © 1993 by Bethany T. Tod, Tadofa Somalis. No part of this web page may be reproduced without the prior written permission of the author and this copyright[/dropshadowbox]